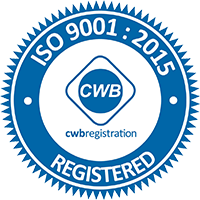 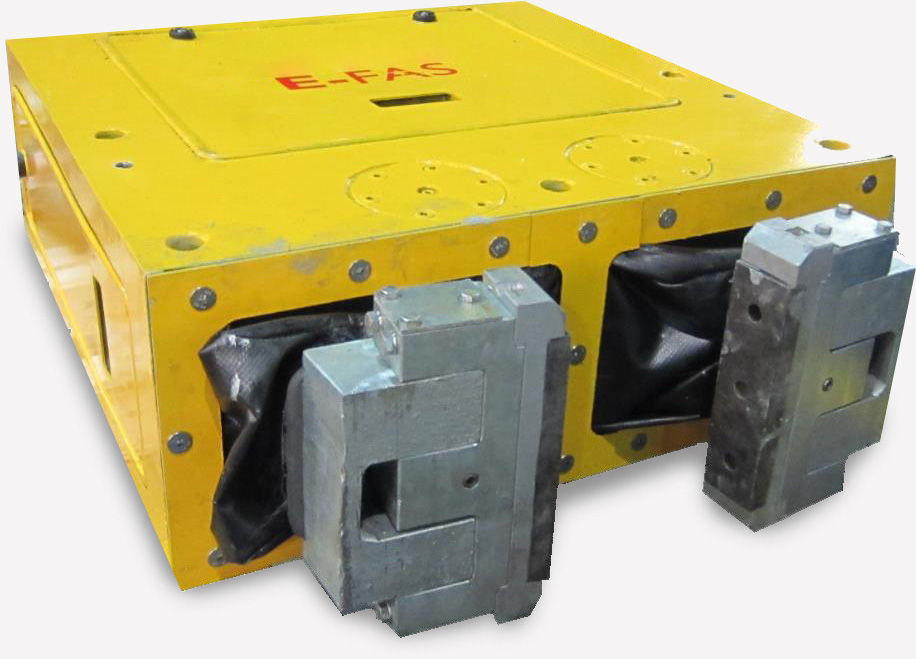 The Emergency Fall Arrest System (EFAS) is designed to arrest and support a conveyance after a rope failure scenario by using hydraulic activated clamps, onto steel, wooden or rope guides in the Mine Shaft.

The system can be triggered electronically or mechanically from a rope monitoring device.

EFAS consists of a number of clamps, a hydraulic power unit and an electronic activation and control system.

Each clamp functions independently and is capable of arresting and holding the conveyance, on a two clamp system. The number and capacity of the clamps used depend on the mass of the conveyance. The clamps are activated or triggered either by using a mechanical or PLC controlled activation system. The hydraulic power unit is used to charge the accumulators and is installed on the bank level.

See How It Works!

Learn how the E-FAS® can benefit your mine.

Safe deceleration rates even with one single person occupying the cage as well as with a full load of people.

Each clamp is a self-contained EFA system on its own.

Multifunctional. Can be used as a Chairing Device as well as a Safety Catch or EFAS.

Why should I consider using EFAS?

The Levelok Emergency Fall Arrest System is designed to arrest and support a conveyance after a rope failure scenario by using hydraulic activated clamps, onto steel, wooden or rope guides in the Mine Shaft.

The system can be triggered electronically or mechanically from a rope monitoring device.

EFAS consists of a number of clamps, a hydraulic power unit and an electronic activation and control system.

Each clamp function totally independent and is capable of arresting and holding the conveyance, on a two clamp system. The number and capacity of the clamps used depend on the mass of the conveyance. The clamps are activated or triggered either by using a mechanical or PLC controlled activation system.

The hydraulic power unit is used to charge the accumulators and is installed on the bank level.

The activation system is supplied by our communications partner Guduza

The system is activated when the rope end load as measured at the rope attachment indicates a slack rope or a rope failure. The Cage PLC will then activate the activation valve in the clamp that will allow oil to flow from the accumulator to the clamp cylinder causing the arms and shoes to grip onto the shaft guides, arresting the cage.

The Emergency Fall Arresting Clamps has an Accumulator and cylinder which is enclosed in the Housing. The holding capacity safety factor of each clamp is 2 times the rated holding capacity.

Accumulator is monitored and controlled with appropriately fitted Pressure Transmitters and Screw in Cartridge Valves respectively.

The position state of the Clamps whether ‘open’ or ‘closed’ is monitored by a magnetic proximity switch which is mounted to the Rod of the Cylinder.

What factor of safety is used on the clamps?

How is the system activated?

The system will only activate under the following two conditions, it will not activate inadvertently as a result of any other conditions. The system will work as designed even if the hoist safety circuit has been compromised or bridged out, because all activation decisions are made on the cage.

The system will only activate if the rope end load is less than the minimum set value, usually 20% of empty cage mass. The hoist will be tripped immediately.

This is a very low risk situation, as the EFAS virtually eliminates all the causes of rope failure. The system will activate because the rope end load will be less than the set activation value, and as there will be a loss of the communication heart beat signal.

If for any reason the rope load does not reduce below the set value the system will activate on loss of the communication signal.

The hoist will be tripped immediately as well.

Does the System Fail to Safe?

The Communications system provides for a number of safety circuit outputs that will fail to safe if triggered.

The clamps are actuated hydraulically and are equipped with stainless steel springs that will hold them open. The reason for this is that we need to guarantee, that the clamps will not apply and remain open during normal hoisting duty.

The modular clamps are designed to hold twice their rated holding capacity. Thus a 6 ton (13 440 lb.) clamp will hold 12 ton (26 880 lb.). Each clamp is a self-contained fully functional EFAS unit designed in such a manner that on a two clamp system, each clamp on its own is able to arrest the conveyance in a safe manner. On a two clamp system we can lose one clamp and still hold the complete cage safely.

To release the system it is important to ensure that it cannot be released accidently. For that reason there is a complete separate release circuit.

On the hydraulic system

Accumulators are double the needed size to allow for issues like air in the system, and temperature fluctuations.

If by accident pressure is lost in one clamp on a 2 clamp system, the other clamp is capable of holding the complete weight of the conveyance.

Furthermore each cylinder in the clamps has been equipped with a pilot operated check valve. This will allow hydraulic oil in to the cylinder to activate the clamp but will not release any pressure from the cylinder. These are zero leakage valves.

The advantage of this is that if we lose hydraulic pressure in any one of the clamp systems and all the pressure from one accumulator is lost, the clamps will not release. If there is a leak in one of the clamp cylinder the other one will remain clamped.

Each accumulator is interlocked using a pressure switch, so that if there is a leak during normal operation and the accumulator pressure drops, then maintenance personnel will be alerted.

The surface panel has a number of safety circuit relay outputs. If any of the outputs don’t work for whatever reason the conveyance side is self-contained meaning it doesn’t require the surface side to function. The winder should be “tripped” out because of this, causing the system to fail safe in a preventative manner.

The system will only loose its transparency (signals to hoist) but not functionality.

With EFAS it is possible to virtually eliminate the occurrence of one of the most significant safety risks to transporting men in cages. Inadvertent activation of safety catch systems generally happens when the hoist stops during an emergency situation. The Horne EFAS will know that this is a hoist emergency stop and not a rope failure, and therefore not activate.

As the conveyance descends in the shaft, a point will be reached where the rope is kept tight due to the weight of the rope alone. Then this function will no longer be feasible as a safety function.

The communications System provides a slack rope monitoring function that will monitor the slack rope condition throughout the entire shaft and not just at the collar area. Warning points can be set to warn if this condition starts to occur, providing preventive action before the hoist is tripped.

During a slack rope condition the EFA system will stop the hoist before any damage can occur to the rope by not allowing the hoist to pail out rope on top of the cage thus preventing the rope from kinking.

The mine must do a weekly maintenance inspection and test of the EFAS on both the mechanical and communication system as prescribed in the maintenance manuals. This will take approximately 10 minutes.

This includes a full clamping pressure check on surface level. The designed pressure must be reached for 5 minutes.

One set of batteries must be kept on charge. The Batteries has to be changed approximately every two weeks.

The clamps need to be refurbished every two years and/or immediately after an EFAS activation.

See the E-FAS in action! 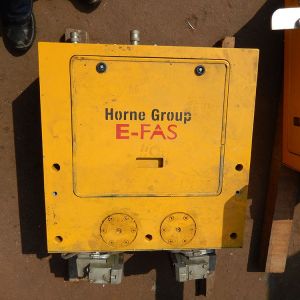 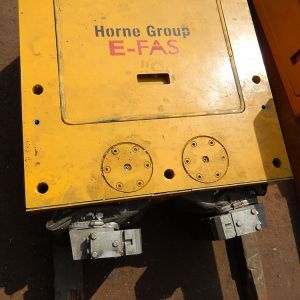 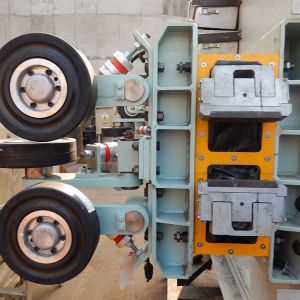 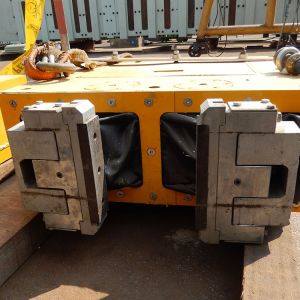 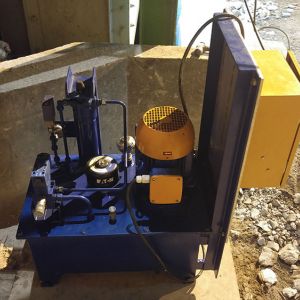 See the E-FAS® system in action!

For more information on the E-FAS®, please fill out the form below.